Mad about the Boy is a larp about survivors of a global disaster that killed more than half of humanity. An inexplicable disease killed all the men in mere minutes. The surviving women are facing not only the enormous task of rebuilding society, but also the possible extinction of humanity.

Providing the participants with the opportunity of playing a larp with artistic ambitions which seeks to give rise to reflections around alternative social structures, family constellations and gender roles. 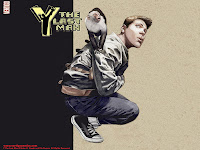 Our story is about a group of women who have applied to an insemination program initiated three years after the disaster. As sperm has become a very precious resource, there are only a few women who will be given this privilege.

The first act of the larp centers around the selection of who will get to enter the program to become mothers, and what new family structures will be the best ones to raise these precious children.

Act one of the larp ends with a man entering - the only one who has survived the catastrophe. How will each woman relate to this man? Before the end of the second and final act the women will have to decide what to do with him.

A larp about a world without men will of course have gender as one of it's main themes. What happens when "mankind" has become "womankind"? What does a world where women have to fill all positions and roles in society look like?
Even if a man comes in and the second act revolves around him, this is not the story of the last man alive. It is the story of the women who were the first to meet him. The man will function more or less as a prop for the female characters and the play between them.

The genre of the larp is social realism. Even if the genre is realistic, we will use some dramaturgical game mechanics (meta techniques) to enhance some of the important scenes in the larp and for the players to experience their character's story on a deeper level.

The larp is played in the Nordic Style. Players are expected to focus on developing their own character's story while at the same time contribute to the common story. The in-game setting is somewhat competitive. The goal of the game is not to win, though, but to experience a story of loss, of new hope, of confusion, anger and grief, but also of joy and expectations of new possibilities. Don't play to win, play to explore your character and the characters she encounters, this new society and all the issues pretending to be in a society where all men have died raises.
In the mixed-gender run there will be men playing women. We expect that they do their best to portray real women, and not drag queens.

Players will receive the character they will be playing and the characters of the other characters in her group. You will also receive contactinfo, but you do not need to get in contact before the game.
What you need to do before arriving at the larpsite
Other preparations, like building relationships and fleshing out your character will be done through extensive workshops during the workshop day.

The larp has been run three times previously, in Norway, The Netherlands and USA.

The photos in the banner are from the first runs of the larp.
Photographers: Li Xin and Susanne Wehner.

If you have questions or comments, please contact us on madaboutlarp@gmail.comYou can also check out the Facebook events for the upcoming runs in Sweden: All-female run and Mixed gender run